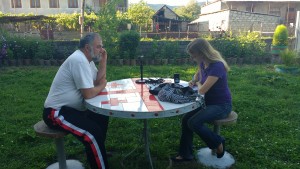 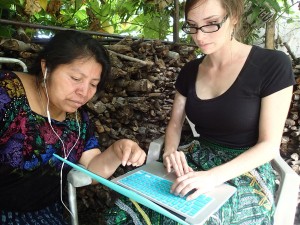 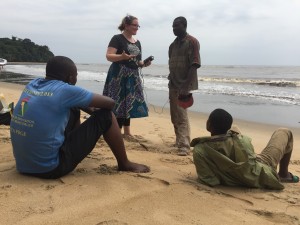 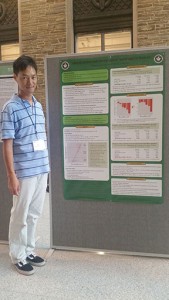 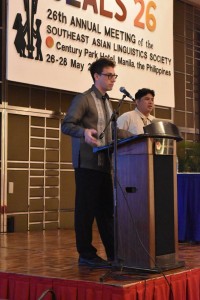 Brad Rentz, along with Dr. Victoria Anderson, presented a poster at the 5th Joint Meeting of the Acoustical Society of America and Acoustical Society of Japan entitled The Pohnpeian stop contrast between laminal alveolars and apical dentals involves differences in VOT and F2 locus equation intercepts. The poster and data can be viewed here.

Raina Heaton presented a paper at the Society for the Study of Indigenous Languages of the Americas (SSILA) Annual Meeting at LSA, entitled Towards a unified account of variability in Kaqchikel focus constructions.

Thomas Kettig presented his poster One hundred years of stability: The case of the BAD-LAD split at the LSA 2017 meeting. He also received a GSO grant of $700 for his trip to Spain last summer to present at the Sociolinguistic Symposium.

Alex Smith’s journal article Merap historical phonology in the context of a central Bornean linguistic area was accepted for publication in Oceanic Linguistics, and his article Sebop, Penan, and Kenyah internal linguistic subgrouping was published in the Borneo Research Bulletin. He also finished his fieldwork on 78 languages of Borneo during Fall 2016.

Victoria Chen’s paper When synthetic meets analytic: A note on structural borrowing in Kaxabu Pazeh was published in Oceanic Linguistics 55(2).

Victoria Chen’s paper Pivot ≠ Absolutive: Evidence from Formosan, was published in the Proceedings of the 42nd Annual Meeting of the Berkeley Linguistic Society.

Victoria Chen, along with Dr. Shin Fukuda, published their paper “Absolutive” marks agreement, not Case: Against the syntactic ergative analysis for Austronesian-type voice system in the Proceedings of the 46th Annual Meeting of the North East Linguistics Society.

Victoria Chen and Dr. Robert Blust‘s paper The pitfalls of negative evidence: ‘Ergative Austronesian’, ‘Nuclear Austronesian’ and their progeny is in press at Language & Linguistics.

Victoria Chen’s paper, Philippine-type “voice” affixes as A’-agreement markers: Evidence from causatives and ditransitives is in press in the Proceedings of the 23rd Meeting of the Austronesian Formal Linguistics Association.

Victoria Chen and Dr. Shin Fukuda’s published a paper Re-labeling “Ergative”: Evidence from Formosan is in press in the Proceedings of the 23rd Meeting of the Austronesian Formal Linguistics Association.

Ryan Henke and Dannii Yarbrough took part in the workshop “Building Capacity in Linguistics and Endangered Languages at Tribal Colleges and Universities”, which was put on by the Linguistic Society of America and the Endangered Language Fund. The workshop brought together linguistics faculty and students as well as students and faculty from TCUs to discuss how we can better use linguistics to help TCU programs with their language teaching and learning goals.

Meagan Dailey and Ryan Henke presented their poster Data citation, attribution, and employability at the 2017 LSA meeting. Their poster investigated how data citation and attribution relate to the job market and training of up-and-coming linguists. It can be viewed here.

John Elliott presented a poster at the Acoustical Society of America annual meeting entitled For bilinguals, Enxet vowel spaces smaller than Spanish, which was a phonetic vowel analysis of Enxet, a Paraguayan language with a typologically rare small vowel system.

John Elliott was awarded a grant from the Endangered Languages Documentation Programme (ELDP) for “The Enxet Documentation Project”, a video documentation project working with speakers of Enxet Sur, a threatened Enlhet-Enenlhet language of Paraguay.  The project focused on bushwalk videos as a means of eliciting stories about and descriptions of the uses of medicinal and food plants in the Enxet indigenous communities.

John Elliott and Russell Barlow attended a training session for the Endangered Languages Documentation Programme (ELDP) as part of their being awarded ELDP grants for documentation projects. The training focused on details of video and audio recording and the ever evolving best-practices in archiving, and was attended by researchers and endangered language community members working on documentation projects in almost every region of the globe.