Kudos to Albert Schutz on the May 2014 publication of his comprehensive, seminal Fijian Reference Grammar!  For more information read about it in Pacific News from Manoa. 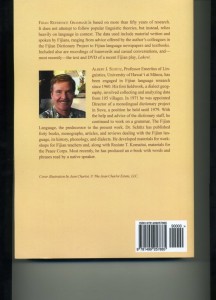 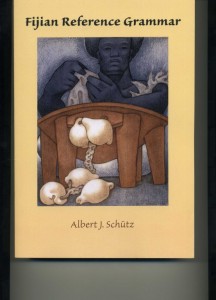 When Al Schütz was asked by his Cornell professor in early 1960 if he’d be interested in going to Fiji, his response was “Sure. Where is it?” This is understandable, perhaps, for someone only five years removed from the family farm, and who had not yet seen the Pacific Ocean. Obviously, geography was not part of his undergraduate Liberal Arts education.

If someone had told him that he’d still be working on Fijian over a half-century later, he would not have believed it.

The two years that followed could not have been more of a contrast. He spent the summer at the University of Hawai‘i, working as an assistant teacher for two courses and gathering information on Fijian at the UH and Bishop Museum Libraries. For ten months in 1960–61, he conducted a dialect survey in Fiji, recording information from speakers in 105 villages from most of the major island groups. How did he travel? By small car, bus, foot, outboard, government boat, sailboat, plane, and horseback. (He would like to add to the list “bamboo raft,” cleverly referred to by Fijians as “H.M.S. No-Come-Back,” but that was only for an afternoon’s respite from interviews on the island of Vanua Levu.)

After leaving Fiji, he spent a term at the University of London’s School of Oriental and African Studies, taking anthropology courses, working on the data he’d collected, and conferring with George B. Milner, who was kind enough to serve as his mentor. Later, back at Cornell, he finished his PhD dissertation—“A Dialect Survey of Viti Levu”—just in time to accept a position at the University of Hawai‘i.

His next contact with the language took place after two summers of fieldwork on a related language, Nguna, from what was called then the New Hebrides, and now Vanuatu. In 1967 and 1968, he worked with Rātū Rusiate T. Komaitai on language lessons for Peace Corps trainees, eventually published as Spoken Fijian (University of Hawai‘i Press, 1971).

Schütz’s most concentrated work on Fijian grammar began when he served as Director of the Fijian (Monolingual) Dictionary Project (1972–79), sponsored for the first two years by a grant from Raymond Burr’s American-Fijian Foundation, the Australian Cultural Fund, UNESCO, and the Fiji Government. After 1979, Schütz continued to work with the project, concentrating on completing the grammar, aided significantly by a grant from the U.S.’s National Endowment for the Humanities. Titled The Fijian Language, it was finished in 1985 and published by the University of Hawai‘i Press. Now, long out of print, it served as the foundation for the new grammar.

Fijian Reference Grammar is based on data, not on linguistic theories, and relies heavily on language in context. The data used include material written and spoken by Fijians–ranging from advice offered by the author’s colleagues in the Fijian Dictionary Project to Fijian-language newspapers and textbooks. Included also are recordings of loanwords and casual conversations, and—most recently—the text and DVD of a Fijian play, Lakovi, by Apolonia Tamata and Larry Thomas.

Although the book is based on The Fijian Language, it includes significant deletions and additions. First, the long historical introduction and the appendix of twenty annotated pre-missionary word lists were removed and combined into a work tentatively entitled Early Studies of Fijian, to appear on-line for students and teachers in Fiji.

Here are the major changes:

1. Now that the monolingual Fijian dictionary, Na iVolavosa vakaViti, has been published, it has been possible to expand the discussion of the sound system to include more recent additions to the alphabet—borrowings from both related and unrelated languages within Fiji. Some new words do not follow the traditional Fijian syllable structure. However, the dictionary does not go far beyond identifying the sources of the new words. Therefore, the treatment in the grammar is open-ended, pointing the way to potential research on which domains allow, or do not allow, what appear to be non-Fijian sounds and combinations of sounds.

2. The beginnings of such a sociolinguistic study grew out of the play Lakovi, which exists in both printed and DVD form. It offers written and spoken examples of different speech styles in context, while also providing such information as approximate ages and kinship relationships among the speakers. Fijian-language plays now in progress promise to provide additional data.

3. Many recent studies of Polynesian languages and Fijian attempt to write rules to predict the placement of accent. A study of the relationship between accent units and morphemes (meaningful elements of words) adds weight to Schütz’s argument that accent guides the hearer to meaning, not the other way around. Rules can apply only to forms up to and including four short syllables.

4. Suggestions from two extensive reviews of the previous grammar have been considered; some have been incorporated, others rejected.

Albert J. Schütz, Professor Emeritus of Linguistics, University of Hawai‘i at Mānoa, has been engaged in Fijian language research since 1960. His first fieldwork, for a dialect geography, involved collecting and analyzing data from 105 villages. In 1971 he was appointed Director of a monolingual dictionary project in Suva, a position he held until 1979. With the help and advice of the dictionary staff, he continued to work on a grammar, The Fijian language, the predecessor to the present work. Dr. Schütz has published 40 books, monographs, articles, and reviews dealing with the Fijian language, its history, phonology, grammar, and dialects. He developed materials for workshops and, along with Rusiate T. Komaitai, language materials for the Peace Corps. Most recently, he is finishing Hawaiian: Past, Present, and Future and producing an e-book for visitors to Fiji, with words and phrases read by a native speaker.