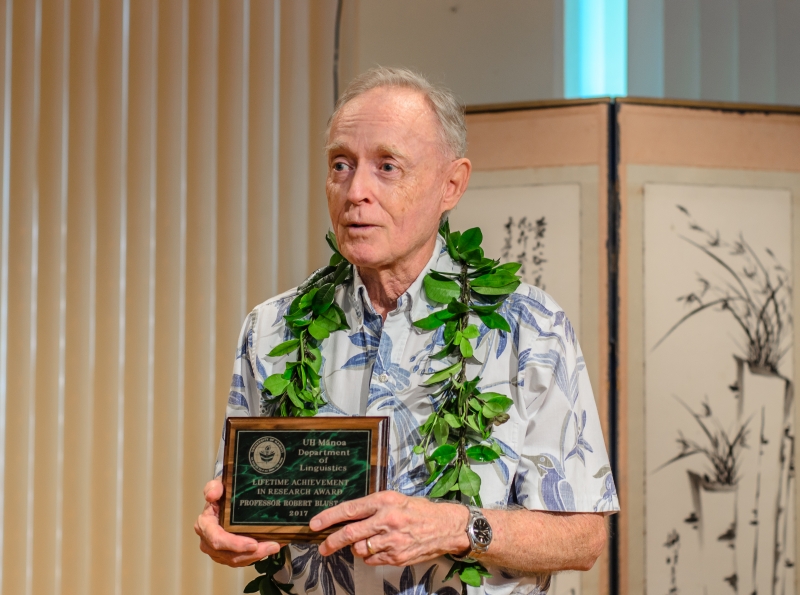 Robert Blust , Professor in the Department of Linguistics at the University of Hawai‘i at Mānoa, passed away on January 5, 2022 at the age of 81.

Following the announcement of Bob’s passing, a number of friends and colleagues have contacted the Department of Linguistics with their thoughts and remembrances, which we will share at this site in order of their receipt. If you would like to submit a remembrance, please send it to the main office email and CC Dr. William O’Grady. 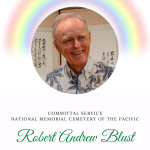 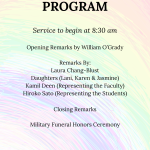 On behalf of Bob’s family, I’d like to welcome you to his committal service here at the National Memorial Cemetery of the Pacific

On the day that I first met Bob, in late August of 1985, we walked together from Moore Hall to the bus stop by the College of Education, chatting about linguistics of course.  Bob had already begun work on the most challenging task ever attempted in historical and comparative linguistics – making sense of the gigantic Austronesian language family. 1200 languages, spread over a vast area; nothing like it anywhere in the world.

As we all know, Bob went on to become the most cited person in the field of Austronesian linguistics, the most influential, and the most admired – an undisputed giant and genius in a field full of brilliant people.

Bob was more than just a great scholar. He was also a wonderful teacher and mentor. In the days since his passing, many current and former students have spoken about his meticulous supervision of their research, his caring advice, and his support for them in times of difficulty.

People who undertake the sort of work that Bob did are unusual in many ways. They have special gifts of mind and intellect, obviously. And the use of those gifts requires a single-minded focus that can make them oblivious to much of life. But Bob was not alone in his life and work. He had three wonderful daughters – Lani, Karen and Jasmine, all here today – and of course his wife of thirty years, Laura, who stood by him and supported him through successes and failures, good health and illness.

The time has come to say good-bye to Bob. I can’t help but think that this is an appropriate place to do so. As Laura reminded me,  Bob’s adult life has come full circle. It was during Bob’s military service that he first came to Hawaii, in September of 1963. While stationed at Schofield Barracks, he was given the opportunity to enter a newly opened language school and to study Indonesian – his first Austronesian language.

Moreover, Bob encountered linguistics for the first time at a talk, at Schofield, by Howard McKaughan, the then chair of our department. Howard  talked about how important linguistics was, how difficult it could be, and how much still needed to be done. After the talk, Bob said, ‘I worked up the courage to approach him, and ask how I might study linguistics myself.’

Little did Howard know that he was speaking to a young man who would someday become a distinguished Fellow of the Linguistic Society of America and one of the world’s leading linguists.

Howard’s advice for Bob, by the way, was simple:  “Don’t try to do everything.” As Bob himself later admitted, he had mixed success adhering to that particular piece of advice.

Well, that was Bob.

He wasn’t able to do everything, of course. But he did more than anyone we know or ever will know. We will miss you, Bob.

The day I heard that Dr. Blust had passed on was the day that I lost a big piece of my heart. He was not only my advisor, mentor and good friend, but also one of the most influential people in my life.

As all of his other students know, he was a wonderful mentor and professor. No matter how busy he was, – writing books, preparing for classes, and publishing 3-6 articles per year – any time, any day, he was always there for us, listened to us, and gave us advice, support, encouragement, care, and of course, guidance on our work or papers. I first met Dr. Blust in 2005 when I was visiting UH. From then until now, I was privileged and honored to have known him. When I started the program, he always checked on me to see how I was doing and gave me encouragement.  When I had to have surgery for a fracture, he asked people in the department to write messages on a card. When I was struggling to work on my dissertation, he suggested having weekly meetings over lunch, which he thought would motivate me to push myself harder.

As students, we were fortunate to see how hard he worked every day and how invested he was in his work. When it comes to his teaching, he was very serious, dedicated and enthusiastic. We all received detailed commentary from him but his criticism was always constructive, done with great care for our futures, and always made our work better. Many of us were probably told how careful we have to be not to make spelling mistakes even in references. He was always a great model of a teacher and researcher, and he helped us in building our own foundations to be good teachers and linguists.

On behalf of former and current students, I am standing here to say, “Dr. Blust, thank you very much for everything you have done for us. You will be dearly missed, but remembered forever. You won’t be here with us anymore, but what you had taught us will remain in our minds. As you told me, every day is a gift, and we’ll use the gift of life wisely. Thank you for having given us part of your life. We say goodbye until we see each other again.”