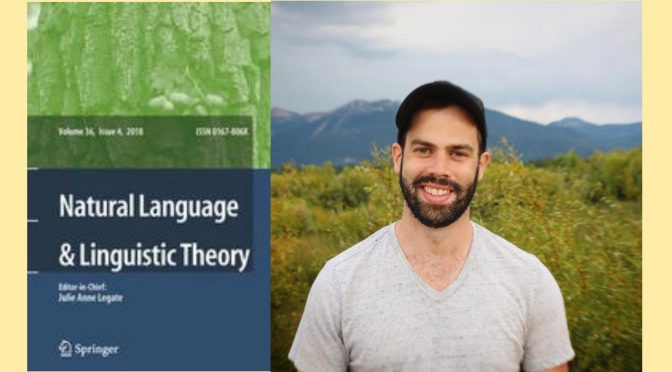 James Collins, recent hire in Linguistics, has had a paper published in the highly prestigious journal Natural Language and Linguistic Theory. The paper is entitled ‘Definiteness determined by syntax: A case study in Tagalog’, and the abstract is pasted below:
Using Tagalog as a case study, this paper provides an analysis of a cross-linguistically well attested phenomenon, namely, cases in which a bare NP’s syntactic position is linked to its interpretation as definite or indefinite. Previous approaches to this phenomenon, including analyses of Tagalog, appeal to specialized interpretational rules, such as Diesing’s Mapping Hypothesis. I argue that the patterns fall out of general compositional principles so long as type-shifting operators are available to the gram- matical system. I begin by weighing in a long-standing issue for the semantic analysis of Tagalog: the interpretational distinction between genitive and nominative transitive patients. I show that bare NP patients are interpreted as definites if marked with nominative case and as narrow scope indefinites if marked with genitive case. Bare NPs are understood as basically predicative; their quantificational force is determined by their syntactic position. If they are syntactically local to the selecting verb, they are existentially quantified by the verb itself. If they occupy a derived position, such as the subject position, they must type-shift in order to avoid a type-mismatch, generating a definite interpretation. Thus the paper develops a theory of how the position of an NP is linked to its interpretation, as well as providing a compositional treatment of NP-interpretation in a language which lacks definite articles but demonstrates other morphosyntactic strategies for signaling (in)definiteness.